This week saw the release of Resident Evil VII Biohazard’s “The Lantern” demo. At three minutes and 31 seconds, it is not a particularly long video; however, it gives a great insight as to how the game will look on VR. As I watched the video, I felt my excitement over this latest installment and the release of PlayStation VR growing. Along with Resident Evil VII, we can also expect Here They Lie, a rather surreal looking game with a stalking humanoid that looks like something straight from NBC’s Hannibal.

With the release of VR on October 13th my mind has turned to horror. The experience of a horror game on VR will be something completely visceral and probably almost unbearable at times. Just imagine being immersed in a world such as Silent Hill; moving through the fog, walking down that first alleyway. The darkness slowly creeping in, until you are plunged into the Otherworld, with some sort of horrific nightmare playing out in front of your eyes. It was terrifying enough on PS1, yet I cannot even comprehend the fear factor of experiencing that through VR. But I know I am willing to put myself through it.

Horror games are undoubtedly a lot scarier than their movie counterparts. Not to say I do not love horror films; quite the opposite, I love them. But as a viewer, you are not immersed, and it is easier to remove yourself from the situation, keep a clear head, and move on with your life. In a game, you are the target and it is up to you to survive, move forward, and conquer your fear.

With the impending release of PlayStation VR, I cannot help but think about which films would make great VR games. I am so ready to enter the world of survival horror. So without further ado, her are my top five horror films I would love to see as VR games.

Now, I know the SAW films don’t have the best reputation, nor do they have the best storylines. But the first film was amazing: the claustrophobia felt in that tiled room as Leigh Whannell and Cary Elwes try to figure how they ended up chained to the wall, the body of Tobin Bell seemingly lifeless in the middle of the room, was electrifying. Now imagine experiencing that fear as you slip the VR headset over your eyes: blurred vision, you awake under water, gasping for breath, as you emerge, you take in your surroundings. You are chained to the wall, and a lone tape player lies next to you, your next few moves could determine your fate. As you progress through the game, you stumble upon more of Jigsaw’s traps, and fellow victims. Even our old friend Billy the Puppet could make an appearance. Now this is a game I most certainly would want to play.

A cult classic, I don’t find this film particularly scary, however, as a VR game I think this would work incredibly well. A hazy summer day spent with friends would quickly descend into a nightmare: your van breaks down in a two-bit red neck town, the local Sheriff is somewhat sketchy, and seems more suspicious of your rag tag group of friends than helpful. You make the deciding to search for help, only to stumble across the Sawyer family home, and all the delights it holds. Slowly, you would work your way through the house, attempting to hide from Leatherface and his family, whilst trying to save your friends from the inevitable. Along the way you would learn of the sordid history of the Sawyer family, see the macabre furnishings, and even have a good old fashioned chainsaw race, there’s nothing more exhilarating than running through the grass at a night, the rumbling of a chainsaw thick in your ears, and a larger than life psychopath hot on your heels. Who’s up for a bowl of chilli?

Let’s forget about the lackluster American remake Quarantine and focus on the original Spanish horror REC. This is another great example of a claustrophobic horror and the power of confining the film to one location. This film has pretty much everything I love; zombies, demonic possession, corrupt religious leaders, a government cover up, and a kick-ass “final girl”. I would love to see a combination of the first two films in the franchise, as a VR game. As a tenant in the doomed property, you would work together with Dr Owen and the fellow survivors, searching for clues to discover the cause of infection, and find patient zero. Of course your journey would be marred by those freakishly fast zombies, and you’ll have the corrupt government forces to deal with too. You might even bump into Angela, the kick-ass final girl from the first film, but is she all that she seems? Now, where do I sign that tenancy agreement…? 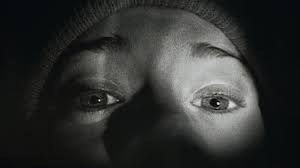 I am ready to defend this film franchise to the bitter end. I know it is not the most popular franchise, especially among my horror loving friends. I however, love it. I was ten years old when the first film came out, and probably due to my age, was scared to death. With the release of the latest installment, Blair Witch, looming, all I have been able to think about is how well this legend would translate to a VR game. Exploring the woods, searching for signs of The Blair Witch, becoming lost, confused, an ever present sense of fear taking over you. I wouldn’t actually want to see a representation of The Blair Witch, I feel the film works so well because we never see her, just the idea of her invading the characters minds is enough to send them over the edge, along with those rock cairns and stick figures of course. A lot of the gameplay, I hope, would take place at night, with limited light sources, often using the video camera to see what is happening around you. I wouldn’t want this game to have a happy ending, and I would certainly love to see a retelling of that final scene from the first film, just don’t turn your back to the wall, OK?

Ok, so this is a bit more sci-fi than horror, but it still has all the elements there to make an amazing horror VR game. It’s Alien for crying out loud! This film is so utterly perfect in it’s portrayal of suspense and fear, that I feel it can be lifted and adapted to a VR game as it is. Of course you would have to play the majority as Ripley, there is no debating that, however I would love to see parts of the story played through the other characters, as you explore the Nostromo searching for the Alien. Imagine playing as Kane: you’ve awakened from your coma to enjoy a meal with your fellow crew members, only to have baby Alien burst from your chest, I cannot even put into words how amazing that would be to experience over VR. Some people have complained that VR can be quite nauseating, and they are right, it is a very full on experience, and some parts of Alien I feel would only heighten this, but I would be willing to through that, if only to catch a glimpse of Giger’s Alien. And how can we even discuss Alien without the real star of the show, Jones. Now if the game could deliver a full section dedicated to playing as Jones, my life would be complete.

Any cookies that may not be particularly necessary for the website to function and is used specifically to collect user personal data via analytics, ads, other embedded contents are termed as non-necessary cookies. It is mandatory to procure user consent prior to running these cookies on your website.